The Automation Manager window is used to view, load and unload Automation scripts. 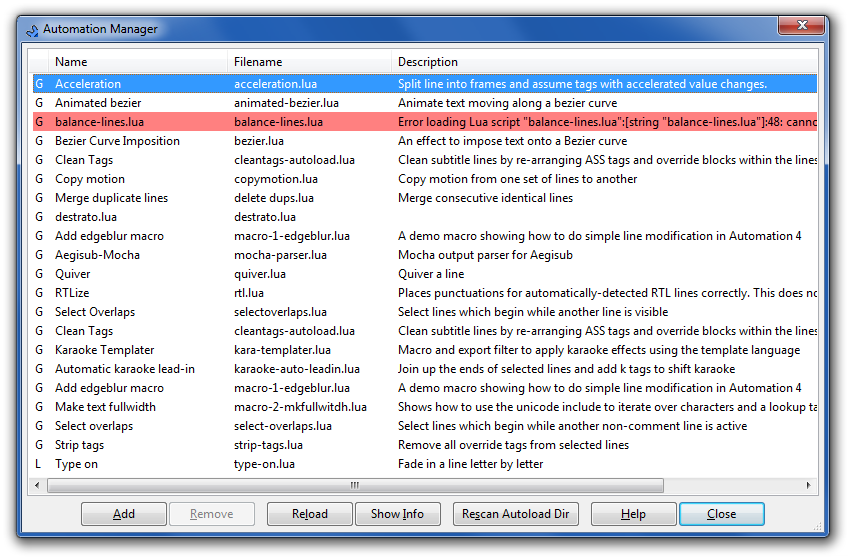 Scripts can be loaded in one of two ways. In the screenshot above, most of the scripts are global (autoloaded), as indicated by the “G” in the leftmost column. Global scripts are automatically loaded along with Aegisub. They are put in one of the Automation_autoload_folders. You can not unload global scripts; you must remove them from the autoload directory, and then rescan the autoload directory.

The last script in the screenshot above is an example of the other type of script: local scripts, as indicated by the “L”. Scripts added manually via the Add button are local to the subtitle file being worked on, and are automatically unloaded when the current subtitle files is closed, then reloaded along with the subtitle file when you reopen it.

Sometimes a script is shown in red in the list. This only happens if the script could not be loaded for some reason. The reason will usually be shown in the Description column. If the description of the error is too long to read, you can select the script and click the Show Info button to see it all. Scripts failing to load should only happen if you are writing your own scripts and manage to make a programming error.

There are 6 buttons at the bottom of the Automation Manager window:

Other ways to reload scripts#

If you’re developing scripts you might find yourself returning to the Automation Manager often to reload your script. There are also faster ways to reload scripts though:

The Automation Manager won’t open when any of there methods are used, but you will get an error message window if a script failed to load. Note that you can double-click on the rows in the error dialog for more information.