In the File menu, there are four menu choices that relate to opening or creating subtitles:

New subtitles
Create a new, blank script (i.e. close the current file).
Open subtitles
Open an existing subtitles file or import subtitles from a Matroska container file.
Open subtitles with charset
Opens subtitles but lets you choose what character set Aegisub will use to interpret the file. Usually not needed, but if you have a file in an unusual charset Aegisub will occasionally misdetect it.
Open subtitles from video
Open the subtitles muxed into the currently open video file. This currently only works with Matroska video files.
Open Autosaved Subtitles
Open a file created by Aegisub’s autosave. Useful if Aegisub crashes when you had unsaved changes or just if you want to open an older version of a file.

When you open a subtitles file that is not detected as Unicode, Aegisub will attempt to guess what character set it is encoded with. If it is unsure, it will ask you to choose from two or more likely alternatives. If the result looks garbled or otherwise incorrect, try reopening it with another character set.

Loading subtitles directly from Matroska files can also be done. The following CodecIDs are supported:

Editing subtitles in Aegisub is done in two areas: the subtitle edit box (where you type in or edit text) and the subtitles grid. Changes made in both the edit box and the grid normally modify all selected lines, and not just the line displayed in the edit box.

The edit box is just a plain editing area with a number of associated controls. They are:

Checking the Show Original box switches the edit box to the following mode:

The top half of the edit box is read-only, and show the text that the currently selected line had when it was first selected. This can be useful for translating subtitles into another language, or just for editing subtitles.

If you right-click anywhere in the edit box, you get the following menu: 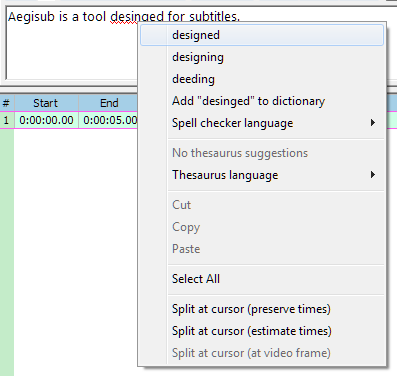 Select all, copy, cut and paste all do what you’d expect them to.

Spell checker
If you right-click on a word that has been detected as misspelled, the spell checker will suggest some likely alternative. You can also set which language it will use for checking from this menu, or add words that it doesn’t recognize but you know to be correctly spelled to the dictionary. For more information on spell checking in Aegisub, see the Spell Checker page.
Thesaurus
Suggests alternative words similar to the highlighted word.
Split line
Splits the line into two new lines at the cursor position. Preserve times keeps the old line’s timing for both lines. Estimate times tries to guess where the split is based on the length of the text on each side of the cursor. At video frame makes the first half of the line end on the previous frame, and the second half start on the current frame.

The subtitles grid shows all lines (comments and otherwise) in the entire file. 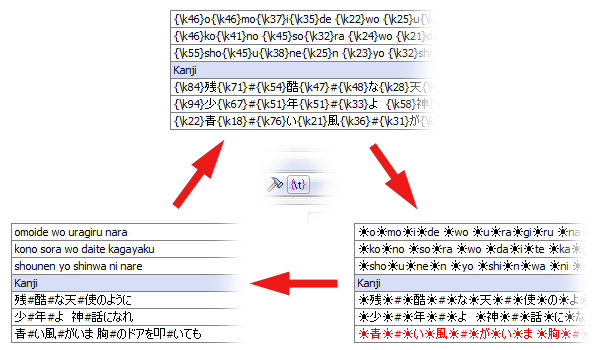 The lines have different (configurable) colors representing different things; see the subtitles grid section of the options page for details on what the colors mean.

By default, the following columns are visible:

The following columns will be displayed if any line in the script uses them:

L
The layer of the line (see above).
Actor
The actor speaking the line.
Effect
The effect for this line.
Left
The left margin.
Right
The right margin.
Vert
The vertical margin.

You can also right-click the top line of the grid (the one with the column names) to manually select which columns you want to be visible.

Right-clicking any other line in the grid gives you the following menu (many of the options are also available in other menus): 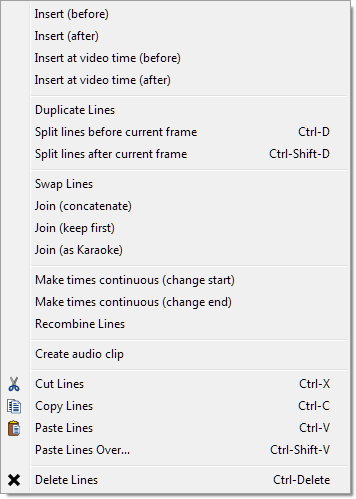 Insert (before/after)
Inserts a new empty line before or after the selected line. The new line will be timed start at 0:00:00.00 and go to 0:00:05.00.
Insert at video time (before/after)
Same as the above, but the new line will be timed to start at the current video frame. Not enabled unless you have video loaded.
Duplicate
Duplicates the selected line(s).
Split lines before current frame
Duplicate the selected line(s), set the end time of the original line to the frame before the current video frame, and set the start time of the copy to the current video frame. Useful for frame-by-frame typesetting and for splitting a line at a scene change to let it move down if it collided with a no-longer-visible line. Only enabled if you have video loaded.
Split lines after current frame
As above, but it splits off the portion of the line after the current frame rather than the potion before the current frame, for when doing frame-by-frame typesetting from the last to the first frame of a line.
Split (by karaoke)
Splits the line into one new line per syllable, as delimited by karaoke override tags (\k and its relatives). The timing of the first line will start at the original line’s start time and end at that time plus the length of the first syllable; the following lines will start at the end of the previous and last for the duration of the syllable.
Swap
Swaps the places (in the grid) of two selected lines.
Join (keep first)
Joins two or more lines, discarding the text of all but the first. The new line will be timed to start at the first line’s start time and end at the last line’s end time. Only enabled if you have more than one line selected.
Join (concatenate)
Same as above, but concatenates the text of all selected lines instead. A space is inserted between the texts of each source line.
Join (as karaoke)
Does the inverse of Split (by karaoke), i.e. the same as Join (concatenate) but inserts \k tags with the timing of each source line in the joined line.
Make times continuous (change start/change end)
Modifies the timing of the selected lines so that the end time of each line is the same as the start time of the next line. Change start/change end determines whether the function changes the end time or the start time of each line. Only enabled when you have more than one line selected.
Recombine lines
Given two or more lines with the same text being partially present in all of them, creates one line per text fragment instead. This is mostly useful for correcting subs ripped from DVDs, which frequently look something like this:

After recombine lines, the result is:

Create audio clip
Saves a segment of the loaded audio corresponding to the timing of the selected lines (starting at the earliest start time and ending at the latest end time) as an uncompressed WAV file. Only enabled if you have audio loaded.
Cut/Copy/Paste
Cuts/copies/pastes entire lines. Note that the lines are copied as plain text and can be copied and pasted freely between text editors, chat programs, web browsers, other instances of Aegisub etc.
Paste Lines Over…
Open the Paste Over dialog.
Delete
Deletes the selected lines.